Ruthee A. from Tampa, Florida, just got the “shock” of her life when she was playing Winloot on Sunday, March 6, 2022, and there it was right before her very eyes! The numbers in our $5,000 Instant-Win Sweepstakes began matching up until she hit all 10! She quickly took a screen shot of the $5,000 Cash Prize Win on her phone to be sure she “wasn’t seeing things,” as she told our prize director, who contacted Ruthee to talk about her biggest win to date! Ruthee was so excited when she saw all 10 numbers match, she said she began to scream, to the alarm of her two dogs sitting next to her at the time.

Ruthee said this large cash prize win “couldn’t have come at a better time!” We often hear that from our winners, and we know that’s simply the magic of Winloot. Somewhere in the universe there is an alignment that seems to occur exactly when a player really needs the money the most! That’s why our winners, including Ruthee, know the best way to win is to keep playing every day! “You just never know. This by far has been my biggest prize yet.” Ruthee told our prize director she needs to move and find a new place with her two dogs. Until she hit that big win, she wasn’t sure how she was going to afford the move, although she works full time. Well, you can certainly afford to move, now, Ruthee and we’re super happy for you and the doggos!

Ruthee has been playing Winloot and some of our sister sites for around five years. She said as soon as she saw how fun and simple it was, she was “hooked!” She went on to say there isn’t anything complicated to do or any questions to answer and doesn’t require a credit card or anything since it’s completely free! It’s true playing Winloot is as simple as signing up for your free membership by entering your email address and basic contact info. From there players have access to over 100 ways to win cash and prizes up to $10 million each day!

Ruthee expressed that it’s a fun way to spend some time each day and she is sure to get her entries in before midnight on a daily basis because “you just never know when you’ll hit a big win,” and that is definitely true! “It’s great because it’s like lotto but you don’t have to pay for it!”

To those who may  not have tried Winloot yet, Ruthee’s advice is: “Winloot, try it, don’t knock it. You will be surprised. You will win,” adding, “Just be consistent. You have to do it every day. Don’t make it your job. It’s not your job. It’s not an all-day thing either. Just play when you have time.” That’s what she does, and it certainly paid off in a big way! Since players have until midnight each day for that day’s games and entries, Ruthee advises to take a break and you can finish later as long as it’s before midnight. Some players even choose to play their games starting at midnight, so they’re all finished for the next day. It’s purely a matter of preference on what time of day to play.

Ruthee spends around 2 hours each day playing all the sweeps she likes, including Winloot. “You have to be consistent and just be patient. Don’t get down because you didn’t win that day because you never know what the following day will be. That’s the fun suspense in it. Keep it simple.”

Ruthee is completely overjoyed at winning the $5,000 cash prize instantly and said, “It is a very exciting moment to hit that amount!” and playing Winloot is “the real deal, holyfield, and you’re not going to get scammed, although there are some that pretend to be Winloot, but this is the real deal.” Winloot is “well worth playing because, you never know, and it is real!”

Big congrats to you Ruthee. From all of us at Winloot, we are so happy to award this cash prize to you and hope you find a wonderful new home to enjoy with your dogs. We are proud to have someone so dedicated among our membership and simply delighted to add your name and awesome win to Winners Way! You are now in good company among over 112,000 other winners to date and that list grows daily with new winners each day! 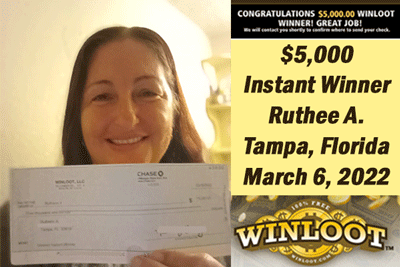