What did it feel like when you found out you won a Winloot prize?
When I received the Winloot message telling me I had won $100, I was in shock for I had never won anything previous to this.

How would you convince someone that Winloot is real?
For anyone who doesn’t believe Winloot is real, I would simply tell them to check out my FB page and view the photo of me with an actual winning check!

What did you do with your prize winnings?
I deposited my winnings into my bank account and there they remain. While this doesn’t sound dramatic as “I spent it on….”, it is what I chose to do.

Anything else you’d like to tell us?
In summary: Winloot is more than just a casual game site to pass the time, you really can win money playing this game on a daily basis and by opening the emails. Take it from someone who had never won so much as a piece of bubble gum: I won $100 playing Winloot and it is REAL! 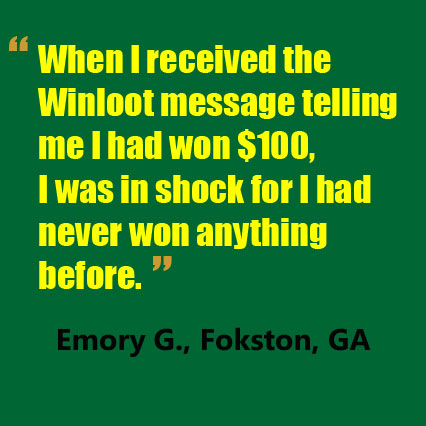